A Conversation with John Fernandez of ForgeRock.

Earlier this year, I had the chance to chat with John Fernandez, the CFO of ForgeRock, about the top challenges of CFOs and the future of AI in finance. John has two decades of experience leading finance organizations for high-growth software businesses ranging from start-ups to large public companies. ForgeRock’s mission is to help people access the connected world safely and simply. They deliver a modern, comprehensive digital identity platform designed for any cloud environment to provide exceptional, secure digital experiences.

▶️ We also created a video of our interview, which you can view here.

Thanks for coming in today, John. With more than 20 years of experience leading finance teams: how have you seen the role of the CFO change in the last five to ten years?

In my experience, the role of the CFO has gone through at least three waves. In wave one, the role became more strategic. If you looked years ago, you’d see that many advertisements for CFOs in job placements would say, “strategic business partner.” That was an evolution from the fundamentals of needing to be astute around financials and accounting, so that was layered on top.

The second wave was around technology propagated by SaaS applications. All of a sudden, CFOs needed to know accounting, how to be strategic business partners to the CEO and business, and how to understand systems and technology. You can do so much with SaaS applications, not just your ERP. Still, the ecosystem of applications helps you solve many other things as well. 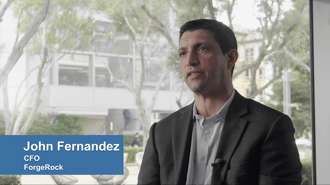 The third wave is really around leadership. That third wave became more and more important in the war for talent and the ability to attract and retain the best people. It’s now layered onto accounting and financial expertise with a strategic business partner who understands systems and can be a great leader.

You mentioned the "war for talent" and the ability to attract and retain the best people. What are the challenges around building back-office teams and retaining talent?

We’re here in Silicon Valley, and my office is in San Francisco, so it’s challenging. My philosophy has always been to hire A+ players. There’s a lot of amazing talent in The Valley, and it is a big challenge to attract them. Obviously, they’re focused not only on the job, role, and salary, but the leadership, culture, and the market of the company. Many of them are very astute on the technology as well.

I focus on “How do I hire A+ players?” Often, that means that you don’t get the exact number of years of experience that you might be looking for ideally. Or, they may not have some level of system training that you would like. But that’s okay. You think a little bit more creatively. But one thing that we never compromise on is the quality of the individual—culturally and intellectually.

The fact that you can hire that caliber of individuals means that on the flip side, you have the challenge to retain them. The brighter they are, and the more capable they are, the more challenged they want to be. To retain them, we’re constantly looking at new projects, new challenges, pushing the envelope, moving faster.

A part of that for me has always been allowing people to take on projects around AI or new system implementations that people are curious about. They’re engaged, and it allows them to make a scalable, lasting contribution and impact on the company.

Speaking of new projects and challenges surrounding AI and new systems, what are some of the more disruptive technology trends you’ve observed in accounting and finance?

In my career, the first major disruptive trend was around SaaS. SaaS applications allowed me to have people working all over the world. The minute we acquired a company, it was easy to bring those people—at that exact moment, as a user—into our SaaS application, whether they were in India, New Jersey, Mountain View in the head office, or San Francisco.

That flexibility is quite incredible. Today, that flexibility is used to allow people to work remotely. Back then, people were still expected to be in an office. Still, it was really through M&A and growth that I found the mobility of SaaS to be really important and allowing people to do things that we never thought we could do.

The other part about SaaS is people developed ecosystems, primarily through the development of APIs. All of a sudden, finance leaders had a SaaS ERP, be it Sage Intacct or NetSuite. And, you now had Avalara for your sales tax, Expensify on reimbursement, and Coupa or Ariba for P2P. All these different applications became a part of the system world owned by a CFO, and that’s been that second evolution. It was ERP/SaaS and then SaaS+, which is the ecosystem of other parties who connect in through APIs.

The second disruption I see today—which is going to be even more impactful—is the impact of AI. The reason AI to date has not taken hold as far as it should have is that there are still a lot of contractors that are being used all over the world to do these jobs. That is simply not sustainable, and that’s for a few different reasons.

The audit requirements are getting harder. The compliance is getting more difficult: "Who’s handling what information?” Data privacy, more difficult. Outsourcing this to either a lower-cost location in the US or an international location, it just opens up all these holes for audit. It opens up the same holes for retaining talent, except now I don’t even have the ability to retain them. It’s someone else’s individual whom they have to retain that’s out of my control.

All these things lend themselves to AI, and the technology is now at a place where it’s broadly used. It is highly relevant. And it’s up to CFOs as leaders to figure out what their AI roadmap is going to look like to get the level of audit assurance they need, the consistency they need.

And the other part of that is scalability. And certainly, for fast-growing Silicon Valley companies, you have to be thinking about using AI—because your company and G&A costs won’t scale if you’re not leveraging AI to handle so much of the workload that you would normally in the past have hired contractors to do at peak times, or outsourced.

John, what areas are ripe for automation and AI? What are some of the challenges where your teams have to do a bunch of repetitive work?

Where we’re looking to leverage AI across the company today is audit prep. Again, so much manual preparation—the staging of documents and the collection of information—can be done with AI.

The second is around accounts receivable and collections. I ran $2.5B of collections at Siebel Systems, with 14 collectors worldwide, so I know well the level of repetition and expectation that is involved in that workload—as well as the fact that consistency and never taking your eye off of accounts receivable, as it’s core to your working capital and cash flow. It’s so important to scale the company as well. It’s a direct scaling area where we can save money.

The last one is really around procure-to-pay, so that’s another process where we’re going through some system implementations with layering and AI.

On the flip side, do you think some finance functions will never be automated?

When you look at finance functions that might never be automated, you can never say never. I think it is around things like technical memos because that’s where we’d like people to spend more of their time. If you think about the accounting function specifically, where I have leaders that come in, and we’re looking at how we defend a position we’ve taken. It’s highly subjective in that you’re reading a lot of literature from your accounting firm.

Many different facts and circumstances fit under a multitude of use cases, and you’re trying to interpret 430 pages of accounting literature to figure out how to defend your case. It’s very similar to defending a legal case in that sense. There’s a lot of facts and circumstances to use to backup and build that case within the context of allowable literature. That is what we want our accountants to do. That’s where we want them focused. So that’s one area.

The other area I think about is complex revenue recognition. But the first half of that can be automated. Going through contracts and using AI to parse out nuances—to parse out non-standard terms, as opposed to relying on someone to send them to you—absolutely can be done better with AI. What you want to do is to surface those discrepancies or non-standard items to a revenue person to review and have them opine on them.

Even from that point of view, you could train the AI to say, “If five out of five times we’ve surfaced this non-standard issue, are we okay to accept that going forward?”

That would allow some leverage in the revenue department to do those kinds of contract reviews.

It’s hard to think that there are areas that we absolutely say could never be automated. Still, for me, technical memos may be furthest in the future with the least amount of recurring benefit. But I think even complex areas like revenue could significantly benefit.

John, it’s always great to speak with you and to hear your insights.  Stay tuned for part II of our interview with John Fernandez, CFO of ForgeRock.

▶️ We also created a video of our interview, which you can view here.

Finance Automation is the Future of the Corporate Back Office

For a long time, the corporate back office was inundated with paper processes, manual data entry...

Robotic Process Automation (RPA) was a welcome advancement for IT and finance professionals because...

Setting the Foundations of the Finance Cognitive Automation Market

It’s been almost one year since our team here at Auditoria actively started taking our offerings to...