You are here: Home / Blog | AI In Finance / The Massive Evolution From RPA to Intelligent Autonomous Applications Has Begun

The Massive Evolution From RPA to Intelligent Autonomous Applications Has Begun 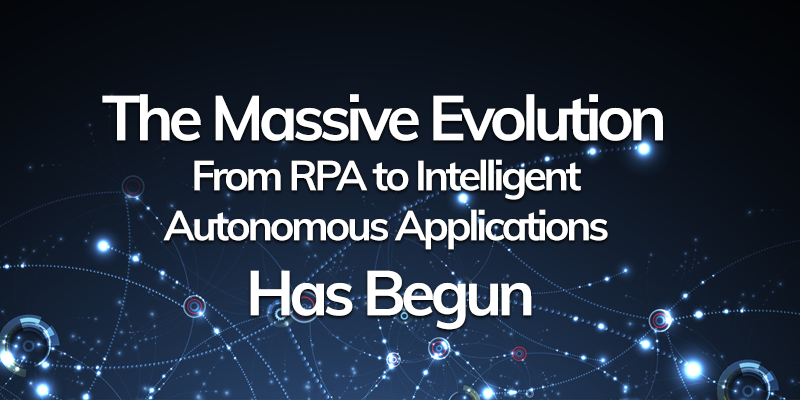 Editor's note: This article originally appeared on the blog A Software Insider's Point of View and is reposted here with permission by the author.

The robotic process automation market has helped many clients increase speed, deliver higher accuracy, achieve greater levels of consistency, reduce costs, provide scale, and improve quality.  Constellation estimates the market size in 2021 to achieve $2.2B  in revenue with a CAGR of 18.8% and growth to $5.07B in 2026.

RPA is a transactional system technology that enables automation of business processes using software robots "bots".  RPA tools watch users and then repeat similar tasks in the graphical user interface (GUI).  RPA is different than workflow automation tools as those are explicit rules and actions written to automate actions in an unintelligent manner.

RPA tools have reached their limit in terms of capability as transactional automation requires a large overhead of management.  Transactional automation is hard to mange.  Hence, a new class of enterprise apps known as autonomous applications have emerged to deliver intelligent automation, cognitive capabilities, and artificial intelligence inside organizations in business functions such as finance, supply chain, customer experience, human resources, and planning.

AI and ML Powers The Future Of Autonomous Enterprises

The reality - traditional transactional applications have run their course. The pressure to reduce margins, technical debt and investment in core systems creates tremendous incentives for the automated enterprise. Customers seek cognitive-based approaches in order to build the true foundation for automation and artificial intelligence–driven precision decisions.

The benefits include less staffing, reduced errors, smarter decisions and security at scale. The quest for an autonomous enterprise starts with a desire to consider what decisions require intelligent automation versus human judgment.  These applications can not rely on hard-coded rules to succeed. They must take a cognitive approach, apply AI and ML techniques and become autonomous.

Vendors from multiple fronts intend to deliver on this promise. Legacy enterprise resource planning providers, cloud vendors, business process management solutions, robotic process automation products, process-mining vendors and IT services firms with software solutions attempt to compete with pure-play vendors for both mind share and market dominance in this market, which Constellation Research expects to hit $10.35 billion by 2030.  Constellation believes every enterprise will design for self-driving, self-learning, and self-healing sentience.

Understand The Five Levels To Full Autonomy And Autonomous Enterprises

In this level, the system can provide basic task and workflow automation.  In the automotive world, this is akin to basic cruise control.

Level 2 enables human-directed automation of business processes.  In the automotive world, this is akin to being able to have adaptive cruise control.

Level 3 delivers automation with occasional machine intervention.  In the automotive world, this is when the car brakes on its own with object detection such as when a child is behind a car during backup and the car brakes.

Level 4 presumes that the machines can deliver full automation but not sentience.  Think of autonomous vehicles that can run on their own but humans are still watching.

Level 5 achieves full sentience and humans may no longer be needed.  Think of these as autonomous vehicles with no human intervention and central controls by machines.

The Bottom Line: Expect Level 4 Autonomous Enterprises To Emerge In 2023

The pioneering work with early cognitive applications show exponential progress in achieving Level 4 status by 2023. Organizations will have to rethink how they work with their transactional applications, future data-driven digital networks, and distributed compute and storage environments.

The future is autonomous. Machines will deliver services that are continuous, auto-compliant, self-healing, self-learning, and self-aware. The need for greater precision decisions will require connections to data-driven digital networks and for more and more sources of data. This battle for public, private, and shared data will shape who wins in new networked economies that form the future of this autonomous decade.

Tipping Point: The State of Automation in the Back Office

It’s here, and the results are compelling. After collaborating with more than 600 finance...

By now, you've probably seen my first set of blogs on Hyperautomation, where I lay out the...

What Is an AR Helpdesk and Why Do I Need It Now?